The VAL Data Explorer is is a partial implementation of the Atlas of Living Australia (ALA). The ALA is built using a multi-tiered architecture using open source libraries and open standards at its core.

The diagram below depicts a high level view of the applications and components that make the core of the ALA system. 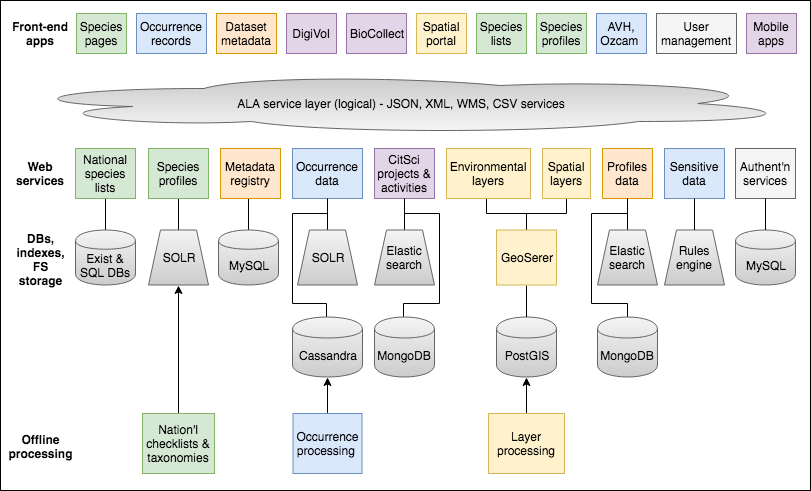 Most front end applications in the ALA are web applications that can be accessed via an Internet browser such as Google, Chrome or Firefox. The set of applications is also complemented by native Android and iOS mobile applications for some of our systems.

Access to data and business logic is kept in the web services layer and is accessible using standard protocols and formats such as REST, JSON and WMS. See section How to Access ALA web services for more details.

The data hosted in VAL Data Explorer is backed mostly using relational and NoSQL databases with a mix of single node and clustered instances. The most common instances are deployments of MySQL, MongoDB, PostgreSQL and Cassandra.

Finally the ALA system also makes heavy use of file system to store data such as images and occurrence downloads to name a few.

If you want to know the complete list of components and applications developed by the ALA, and drill down into the specific documentation for each one, please visit the ALA repositories page.

To see which ALA modules are implemented under the VAL Data Explorer, see LA Nodes and Components.

To see what versions of ALA modules are implemented by the VAL Data Explorer, see LA Component Versions.

Material adapted from the Creative Commons Attribution 3.0 Australia by Atlas of Living Australia for the Vermont Atlas of Life.

Did you find it helpful? Yes No

Send feedback
Sorry we couldn't be helpful. Help us improve this article with your feedback.